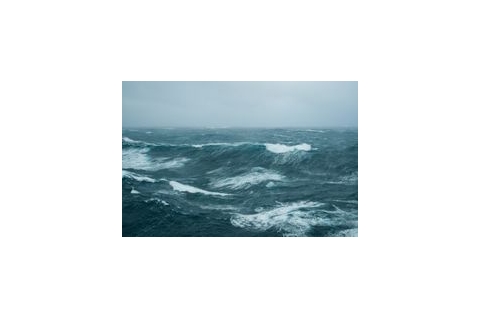 That's because these Women's Bassmaster Tour (WBT) anglers from Arkansas also work for the U.S. Geological Survey (USGS), and part of their jobs is to drive boats directly into the heart of turbulent dam tailwaters and navigate raging rivers to check oxygen levels and other elements of the water column.

The strategy that Heavener and Gipson have developed for working in such waters can also be used by the rest of us when we occasionally encounter high winds and big waves.

"When you're in rough water, trim back down," emphasized Heavener, explaining that a lower bow will keep you from getting slammed hard when your boat hits the backside of a wave.

"Go slower, but keep the boat going so you won't get swamped with water from side waves. Ride the water instead of flying from one wave to another."

Motor into the waves as much as possible, she added. "When you try to cut across waves, you can get into trouble."

Study the waves, note where they're breaking and how far apart they are, and try to figure out the best route, the Arkansas pro added. Sometimes, that can mean tacking, or approaching at slight angles, to avoid taking waves over the bow.

Plus, put those bilge pumps on automatic.

"That way, if you take a wave, they will pump the water out quickly and you don't have to worry about trying to find the button to turn them on when it's already happened."

Even better, avoid rough water altogether. "Watch the weather forecast the night before,

" Heavener said. "If you're back in a pocket that's sheltered, look up the banks at the trees and how they're moving.

Plan ahead. You never want to wait to the last minute to come in."

Planning ahead includes finding out if your angling partner can drive a bass boat in the event you become incapacitated. If he or she can't, provide a crash course in the basics.

Wakes are another hazard that the two USGS employees must contend with on a regular basis, especially when they're on the Arkansas River alongside huge barges and cabin cruisers.

"It might look smooth behind them," Heavener said. "But slow down and trim down anyway. There are big swells and rollers back there that you can't see. Also, a barge might be pushing water in front. Watch out for that."

Also look out for secondary waves rolling toward you from the sides. They are created when the initial wakes bounce against the shorelines.

Ease over those big swells and rollers. But if the wake is from a bass boat or other small craft, you probably can just trim the engine a little and cut through it at a 45 degree angle.

And, of course, always watch out for the boats themselves, Heavener cautioned, especially when it comes to motoring in marked channels.

"Boats tend to peel off to the right, so be really careful about passing someone on the right," she said.

"Also, if you don't know the water, don't just follow someone out of the channel. Yes, they might be from the area and know the water and where they're going. But they also might not know what they're doing."

While you are watching out for your own safety when it comes to waves, wakes and channels, don't forget to be courteous to others. "Set your boat down when you go under bridges,"

Heavener said. "Slow down in no-wake zones. Remember, you are responsible for your wake."

Also, if you haven't done so already, take a boating safety course — especially if you own or plan to own a bass boat or other high performance craft.

You can use this tool to change your cookie settings. Otherwise, we’ll assume you’re OK to continue.

Some of the cookies we use are essential for the site to work.

To control third party cookies, you can also adjust your browser settings.